Questions to be Asked?,..

A recent homily given by a young priest hit a nerve among many of the Faithful and perhaps caused us to pause and to think.  Father Jacques Hemel, the martyred 86yr old french priest who went willingly to his death caused by two young ideologically bent followers of radical Islam.  The content of the homily was simple,.. 'Where were the men in the Parish to rush and protect this priest?'  We heard about the women and the nuns who assisted at the Mass,.. So where were the 'dudes' so to speak?

It goes without saying that the Church as well as society in the last 45-50 yrs has suffered a crisis in what it means to be a man.  The Church has often attempted to present a 'user-friendly' childish or feminine Liturgy whereby the work of God is put to the side in favor of a 'feelgood' community celebration.  As with any shift, whether cultural or social, we as human beings tend to go from one extreme to the other.   Gone is the Fulton Sheen, or Bing Crosby model of priesthood, and in its place, a recycled Mr Rogers has taken over along the buzzwords 'pastoral' and 'culturally sensitive.'  The results have been disastrous.

The Church has little to no men involved in Parish activity.  Most parishes have become so feminized that the homily feels like a tickle fest of cotton candy goodness!  This is a sad reality but one that must be addressed.  Yet the Church is a microcosm of what is going on throughout the Western hemisphere.  A total crisis in manhood, and those who suffer are the women.  Countless times I have been emailed by female friends asking why dating has become a near impossibility.  It seems that with the emasculating of the Church, came an emasculating of society and thus men have forgotten virtue, sacrifice, hard work and nobility.  In its place we have men who carry satchels (purses?) are encouraged to 'cry' and have a complete lack of any sense of responsibility.

Growing up this was not my reality, and perhaps one of the reasons why I'm considered 'archaic,' 'medieval,' and downright 'misogynistic.'  My father is an Alpha male and is gifted with street smarts.  He grew up in a verrrrrry working class neighborhood in Montreal, mixed Italian and French, learned to fight, to have respect, to be respected and to walk upright.  He raised me the same way.  I have always stood up for myself and been able to call out nonsense.  I was taught to value and protect women and those weaker than me, to stand when a woman walks into a room, and to give her my seat should she have none.  To help old ladies cross the street, and to always hold a door open.  If I were to come home and complain that I got bullied, my dad would reassure me and tell me to defend myself.  I was taught to be a 'man' and/or man up!  Better to scrap it out, maybe take a beating but gain the bigger kid's respect than to hide.  These lessons never left me and still continue to be part of me.  Thus since the age of eight, I have always trained in Martial Arts.  Jesus it seems, according to Scripture is no different!  In the second chapter of St John's Gospel, He makes a whip out of His belt and kicks some ass!!!  Yet why in society and in the Church do we get this fluffball Jesus???  Soooo my question is; what the hell is happening?

In society as a whole, extreme feminism, the so-called sexual revolution along the plague of pornography have turned men into selfish little monsters.  In the Church, perhaps too many 'delicate' men joined the priesthood to hide from the world?  The men who weren't in the Church during the murder of Father Hemel are the men who weren't in the real world and instead not really knowing what it means to sacrifice.  When we clean up our own selves and start acting according to our own nature, perhaps we will reclaim our position as leader, provider and protector.  Until then, I wish to apologize to all women who seem to be at a loss in finding a suitable husband. 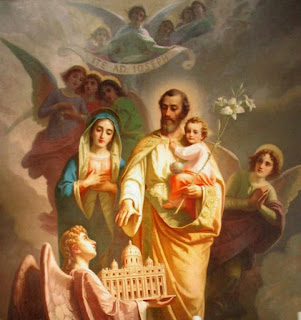 You are not alone in describing the problems of the Church today as "feminization," and it certainly seems to be a not entirely inappropriate description. Witness the overwhelming amount of estrogen vs. testosterone in the pews at the average parish. But really, this emotionally cheesy dreck does not (most emphatically *NOT*) appeal to all women. Virtue, sacrifice, hard work, and nobility appeal a not insignificant number of women.

Hi Marco. Allow me to expresse myself in french, it will be easier for me.