A few months back, I mentioned that there would be 'guest bloggers' on 'Confessions..'  Well today is one of those days!  The shuttle just landed on Cybertron, along with some valuable energeon cubes and a dose of Padre Pipes!!!!  Think back to Rowdy Piper smashing a coconut on Jimmy Snuka's head,.. Well Father be laying the smackdown on heterodoxy!

A friend told me about some liturgical abuses that happened at a mass she recently attended (at a high profile parish to boot). She said the priest who presided the Eucharistic celebration did not distribute Holy Communion; rather he had a layperson giving Holy Communion in his place. Then, after mass, she asked the priest why he didn’t distribute Holy Communion? He said he had to “wash the dishes” and that the laity are to have a more active role. There are several abuses present here: 1) The presider is to distribute Holy Communion, he is the primary Eucharistic Minister. 2) Referring to the purification of the sacred vessels as “washing the dishes” is completely disrespectful, and downright scandalous. 3) The priest totally missed the boat on VCII’s call of a greater participation by the faithful. These abuses are very upsetting; because they just flat out shouldn’t happen. They are also very disturbing because this is not an isolated incident. In the end, these abuses cause a strain on the faithful who love the liturgy, and are not asking for anything more than the mass to be faithfully celebrated as prescribed by Holy Mother Church.

Flare up with a fire of righteous anger in union with Jesus, for love of His Church. Speak to the pastor, go to the bishop if necessary. Challenge the errors and outright sacrileges going on in the Lord's house. Be like the widow in the parable about the unjust judge (see Luke 18:1-8). For as Christ says, “will not God vindicate his elect, who cry to him day and night? Will he delay long over them? I tell you, he will vindicate them speedily” (Luke 18:7-8a). Therefore, be persistent, in a charitable manner, as you call for faithfulness from your shepherds.

The Church is the Body of Christ; people of God with Jesus as our head. The bishops and priests are sent to serve the people of God, to serve you, as Christ’s representatives! Not to serve themselves. The cleric is to be modeled after Jesus who, “did not come to be served, but to serve, and to give his life as a ransom for many” (Matthew 28:28). Therefore, bishops and priests are not to push their teachings, doctrines, ultimately their own vision of the Church based on their will. They are to present the Church's teachings, doctrines, and God’s vision for the Church according to His will... faithfully in its entirety.

It is the Father’s desire, and therefore your God given right; to have bishops & priests 100% faithful to Holy Mother Church. I would also suggest that it is a God given right to worship in your home parish that is 100% faithful to Holy Mother Church, by adhering to all the Church proposes regarding the governance and life of each Catholic community. Do not settle for anything less than all Jesus desires for you, which the Church is to give you, through Her shepherds who promised faithful adherence to all the Church requires from Her ministers.

At his ordination, the one to be ordained is asked by the bishop, “Are you resolved to celebrate the mysteries of Christ faithfully and religiously as the Church has handed them down to us for the glory of God and the sanctification of God's people?” To which the one to be ordained replies, “I am.” This promise is made to God, to the Church (all the baptised), and I would include this promise is made to all of humanity as well; for the priest is to minister directly or indirectly to every soul, so all may come to know and accept Jesus for eternal salvation. God, and the Church, expects the priests to make good on their promise.

Now, it is a terrible thing, and not to be taken lightly, when the ordained does not make good on the promises he made. He is essentially sinning against God and humanity. In abusing the liturgy or spreading errors; the bishop or priest is actually publicly sinning by breaking his promises for all to see, which is scandalous. In doing this, he becomes a false witness. Through his actions contrary to what the Church requires of him, he (be it his intention or not) actively and flagrantly spreads contempt against Holy Mother Church by disregarding his promises, and what the Church requires of him.

With this reality unfolding in The Church, one thing is sure; bishops & priests need prayers! Some become discouraged and write-off their priests as hopeless heretics. Do not dismiss them! Pray for the clergy, your shepherds, that we remain faithful to the awesome task of serving the people of God. Pray that we remain faithful to our promises. Sometimes it is a misplaced intention to do good. Sometimes it is ignorance. Sometimes the ego gets in the way. Sometimes it is down right disobedience and rebellion. Oftentimes bishops and priests face great battles on many different fronts and on a daily basis! Should some of the clergy have fallen away, fallen into error, fallen into unfaithfulness; pray hard for them. At the same time, and this must be reiterated, do not accept anything except what they have promised to do!

Finally, and above all, entrust your bishops and priests (we are ‘yours’ because Christ called us to Holy Orders, and entrusted us with this sacred responsibility for your good. We exist for ministering to you!) to the Immaculate Heart of Mary. She will help mold them after her Son's priestly Sacred Heart. 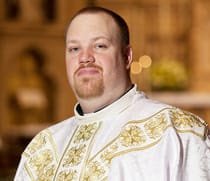 Posted by Optimusmastro at 12:35 PM