Not Optimusmastro, musings of Marco Ep5


A lenten pep talk,.. I'm preachin' to myself as well!  Too often all of us 'social media' Catholics forget that the essential remains Jesus!

Posted by Optimusmastro at 7:12 AM No comments:


Perhaps a controversial post regarding the last US election.  We have all and are all getting a little tired of it.  It seems that so many armchair political analysts are coming out of the woodwork to give an opinion.  To be clear, I am not a political ‘expert’ nor do I aspire to be one.

Let’s be clear.  I don’t know Donald Trump.  I have never met him, I really don’t wish to meet him, nor do I wish to have a beer with him.  I don’t nor do I enjoy his twitter feed or his persistent outburst which are crude, and classless.  That being said, I do not subscribe to the constant media bashing, Hollywood ‘holier than though’ approach of left of centre millionaire social justice warriors crying at full blown crazy level.  My question for all out there remains this.  Like most people, I  thought Trumps’ candidature was a reflection of the state of politics in the US, but then came the Wikileaks dumps.  My opinion on who was worse changed.  Who is worse, Donald Trump, the sociopath and most probable ‘character’ that he plays on TV, or George Soros, the billionaire communist funding the Hillary Clinton/Obama machine?

All this talk about Russia, takes our eyes off the ball.   Whether or not Russia interfered in US elections does not change the fact that the content was clear.  As a Catholic, there was overwhelming evidence with regard to an infiltration orchestrated by the Clinton camp to subvert the Catholic Church at Her highest levels, initiate a Catholic ‘spring’ and finally topple Her, leaving a socialist/communist machine in its wake.  That is not to say that I’m a conspiracy theorist/’truther’ who denies 911, I am though a person who like any other human being is naturally curious and hard wired for Truth.

The whole fake news issue has been around since the beginning of time.  We as human beings, through technology have gotten better at it.  Mafia leaders, politicians to philanthropists and special interest groups have constantly tipped the ‘media’ and balance of power in order to ensure that their preferred candidate or option comes out looking good.  Sooo,.. As much as Trump and the mainstream media are screaming Trump’s links to Russia, what about alternative right media’s discovery of an elite pedophile ring with ties to heavy duty politicians advancing a globalist agenda?  We can’t deny this, and the fact that social media is discovery this, the people who run the social media sites are also trying to curtail these stories.  Think about it this way,.. Milo Yiannopoulis had to resign from Breitbart because of controversial comments regarding pedophilia.  I agree 100% with firing him or forcing him to resign.  What he said was utterly disgusting and should be punished.  My question is why did not the same mainstream media come down on George Takai, who basically advanced the same opinion?  Couldn’t be that Milo who is nationalist must be punished while Takai, who is globalist gets a free pass?  This should make us all think…

The world is changing and gone is the traditional ‘right’ vs ‘left’ dichotomy, leaving in its wake, Nationalism vs Globalism.  The example of Britain’s exit from the European Union comes to mind (Brexit.)  Perhaps all is not what it seems to be and perhaps we have been granted a time of Grace? Who knows?

What am I saying?  To paraphrase the song from the California Raisins,. ‘Heard it through the grapevine,.. ‘believe none of what you hear and only half of what you see!’ – I’ve always been an independent thinker, neither ‘right’ nor ‘left’ but instead celebrating my independent ‘thinking’ self.  I don’t know all the answers, but I will never be a sheep to ideology one way or another!  I watch CNN, ABC, CBS, FOX, CBC, CTV, and Global.  Still I will supplement my information by watching online sources such as Rebel Media, Lifesite News, Mark Dice, Alex Jones Infowars, Church Militant TV, Next News Network  Joe Rogan podcast, and Steven Crowder.  After gathering all my ‘sources’ I will form an intelligent ‘opinion’ taking into account the sourced material being referenced.  I still will never call it Truth, simply because I will never know all the facts essentially because I am still receiving them 3rd party.  In this light,.. Pontius Pilate’s quote to Jesus comes to mind,.. ‘Quid est veritas?’

I won’t post links, but instead invite all those who can critically ‘think’ to do just that.  If you find yourself on the ‘left,’ you find out that although the Christian refusing to bake a cake for a gay couple is a contrived media plot, considering that Steven Crowder proved that it is much harder to get a Muslim baker to bake such a cake!  (https://www.youtube.com/watch?v=RgWIhYAtan4)  If your on the right, you may find out that Iraq had no weapons of ‘mass destruction.’ (I believe history has already proved this point,..).  What is the desired result is that you develop an independent thinking brain.  Devoid of all influence and instead is to be informed(So that you may form) by all these news stories, sites and opinions!  (Yes I posted one link, because well,.. its funny! :P ) 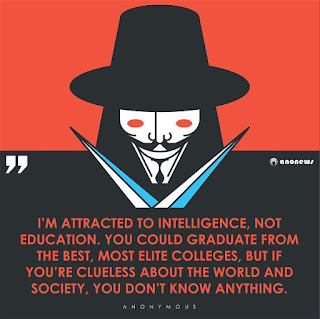 Posted by Optimusmastro at 3:23 PM No comments: