The idea or notion that the Liturgy is the central sticking issue between the Society of St Pius X and  Rome is a tired notion.  It is also a notion that has no weight.  While the liturgy during the time of the Council was called into question, (Ottavianni intervention) there still did remain some Theological barriers which prevented the SSPX from full reconciliation.  (Though the schism became formal in 1988, When Archbishop Lefebvre consecrated Bishops without Papal approval..) in reality, it had already occurred.)  For this particular blog post, we will look toward the Ecumenical movement and specifically the idea of Religious Freedom.

As always, we will contextualize the situation.  The Second Vatican Council, in many ways the cataclyst that launched into question a whole generation with regards to hermeneutics.  The Council in many respects broke with a certain rational for even holding a Council, as there was never any doctrinal dispute which necessitated a Council for correction.  On the issue of Liturgical Reform, this was undertaken way before VII was even a thought, in order to correct the Tridentine Rite and purge it from its own abuses.  At the time of Trent, the Real Presence was called into question by protestants, so Altars were created with a Tabernacle glued onto it.  This turned into a ‘Jesus’ refrigerator, and Adoration was not seen as a continuation of the same Sacrifice, but in certain places, became its own animal.  In a Liturgical setting, the Altar is to remain the focal point of the Liturgy, yet with a Tabernacle on it, it can become secondary, to the Real Presence in reserve.   Pope John 23rd in good faith, wanted an aggiornamento, an updating to present the Faith to a world that was changing.  The modern world, saw a sexual revolution, feminism and an all out assault on the establishment.  This of course produced breakaway groups, sedevacantists (No Pope, the CMRI, SSPV), Conclavists (A true Pope somewhere, usually elected by the person’s family), and of course, the SSPX, (Who believe that the Pope is valid, but may be a materiel heretic, but not a formal one…)

For Ecumenism, and inter-faith dialogue, the SSPX sees this as an invitation to Universalism, something that has been further clarified by both Bishop’s conferences, the 1994 Catechism and ‘Dominus Iesus’ (Document from the congregation for the doctrine of the Faith.)  The fact remains that we need to know the ideology of the other, before we can present the Gospel in its fullness.  So by hierchalizing different religions became necessary by asking how much Truth they possess?  The Orthodox are usually ranked first and seen as a ‘Sister Church.’  (On this issue alone, Ecumenism has worked, as in 1965, Pope Paul VI and Patriarch Athanagoras revoked the excommunications from 1054.  Both sides recognize valid orders, and the Orthodox understand the primacy of Rome.  There still remains a sticking point with regards as to how to exercise this ministry.)  Up next are the protestant traditions,..all ranked according to how much truth they contain.  (In this regard, ‘High’ Anglicanism is significantly closer than the United Church..).  Then we view the other monotheistic religions followed by the pantheistic ones.

The fact of the matter is that the question of Liturgy remains a smokescreen.  Pope John Paul II offered them a personal prelature back in the 1980s which they rejected, even after they had a signature.  Their real problem remains the problem of Religious Freedom and how to properly understand it.   ‘Vatican II’s Nostra Aetate attempted to show that God in His infinite Mercy desires all men to be saved.  In doing so, the Church does not promote universalism, but through dialogue and discourse attempts to show that the human person is called to freedom.  The freedom to accept or reject, the Gospel of Christ, being proposed and never imposed.  ‘Freedom’ is doing what you ought, not what you want!  That is license.  Has this position changed from the Church reaffirming Herself as the one True Church changed?  Absolutely not!  However in reaction to the Father Feeney issue from the 1940s, an amplification was needed.  This position is also closer to Aquinas thought.  The Church returning to its sources sought to recognize what is true and holy in other religions in order to advance and further engage people.  The Church must separate a contextual situation from its actuality.   The SSPX plain and simple, look to the Syllabus of Pius IX as ‘infallible’(which it is not, as to read it literalistically would not have me typing on a computer, as that would be an error... Syllabus ) while forgetting the context in which it was promulgated!  So there is an issue within their Theology whereby even Jesus would be called into question when He meets the Samaritain woman or still St Paul in Acts would be called into question by the SSPX as to how he evangelized in Athens.  I think the above video by Bishop Fellay of the SSPX shows that it has nothing to do with Vatican II.

A few clarifications;  Archbishop Lefebvre never rejected Vatican II or the Reform of the Mass.  What he rejected was the Rite put in place in 1969 by Paul VI,.. (which it can be argued deviated from Sancrosanctum Concilium).  Secondly Pope John Paul II had them already set up as a prelature which Lefebvre rejected.  The next SSPX post will examine the Syllabus of Pope Pius IX, its context when it was written, (the end of Christian philosophy,) and staving off the birth of so-called enlightenment thought giving way to modernism. 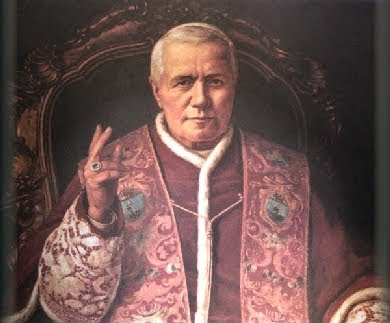