Lord Jesus I thank you for the gift you gave Holy Mother Church.  The Holy Spirit selected Pope Francis and I along with all the baptized faithful, pledge obedience, loyalty and respect.  These are exiting times.  I think back to 2008, when 'Confessions' was launched, I Optimusmastro was in a relationship with an amazing woman, discerning marriage,.. (actually was running away fro priesthood! ) and we were in the middle of Pope Benedict's reign.  All Popes are gifts to the Church and in many respects, represent where the Church's mission is at the moment.  Pope Francis has already indicated that he is a man of prayer, deeply devoted to the Blessed Mother, and to the poor.

What saddened me, were the reactions almost immediately that the so-called 'Spirit of VII' crowd was diappointed,....again.  This Pope has about as much chance of ordaining women and marrying gays, as of repealing the laws of gravity.  He is a stalwart defender of orthodoxy, but what makes him truly dangerous, (in the socialist view) is the fact that he is extremely pro preferential option for the poor!  WOW!  Truth and humility?  Has there been any other?  Well,.. All Popes charism's were necessary at the time of their elevation to the Papacy,..But this Pope has shown strength and humility,..

On the other side of the coin,. **sigh**.  I have never hid the fact that I love the Liturgy.  Though I consider myself a Blessed JPII kind of guy, I admired Benedict for his Liturgical appreciation.  Ordinary Form and Extraordinary both accepted and promoted.  Liturgy at the end of the day is the work of God, and the people participate in it.  What I do have a problem with is the angry radical crowd of Liturgical perfectionists angry at anything not Latin.  Then within minutes of Francis' election they were complaining that he didn't celebrate the EF Form?  C'mon!!!!!!!  First off, I love the Extraordinary Rite, I really do,.. but a well celebrated Ordinary Form is great too,.. This is not a question of 'either' 'or'... But instead of, 'Both' 'And!'...I appreciate Church Militant TV, as well as EWTN, Catholic Answers, and of course Word on Fire!!!! (Fr Barron is my modern intellectual hero while I await the day to train with Fr Steve Grunow! ;)) What I do have a problem with is not so much the Vortex, with Michael Voris, but the fanbase who eagerly await the next episode exposing liturgical abuses within an Ambrosian Rite parish in Iceland,.. These people remind me of people, (sorry to say this,..) who are addicted to porn, complete (sorry for the image, but,..) with a box of kleenex beside them.


The Church is the Mystical Body of Christ, but She is also very human.  Jesus promised infallibility, not impeccability, and we at times seem to forget that.  In St Matthew's Gospel, we read that the gates of hell will not prevail.  That, my friends, is Jesus speaking!  So whatever Pope steps out on the balcony is the will of God!  By obedience do we attain sanctification!  Pope Francis, I, your lowly seminarian pledge my obedience to you. 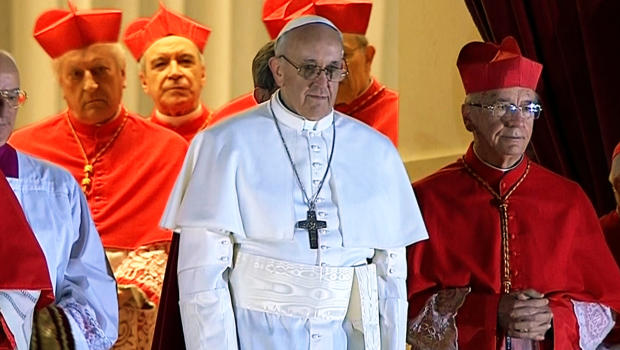 Thanks be to God for the gift of Pope Francis!
Posted by Optimusmastro at 9:52 AM

Hello Optimus. Thanks for this post. There had been a lot of garbage these past few days, especially from the trad side of the spectrum. I've even seen some flip-flopping too with Pope Francis being praised the day of ascension, but after its back to Rad-Trad business. This is well needed, thanks.

Thanks be to God indeed! I hope there will soon be an end to the premature sniping from supposedly loyal Catholics.

Your pledge of obedience is a great idea. As a humble, though often angry, practising Catholic (practising, too, in the same sense as I practice the flute and saxophone, so as to get better) I pledge my insignificant obedience.