What's going on you ask?  Well it looks as if starting this coming Advent,..the new translation of Mass will be implemented in dioceses across Canada and the US!!!!!!! (Cue The Rock's music,...)  Finally!,..Finally!,..Finally the Holy Sacrifice of the Mass has returned to its Heart!!!!!  Did it ever leave?  Well not exactly, EWTN always had a beautiful ordinary form liturgy, but most parishes that I experienced, the Mass more often than not left me either scratching my head or contemplating the SSPX! 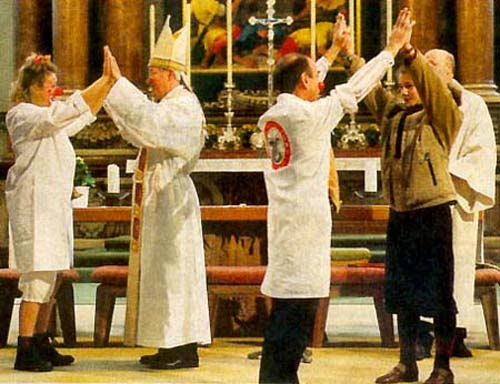 As a primer, our late Pope, John Paul the Great desired a more faithful translation of the Mass in the vernacular to be introduced.  The original translation was done quickly in the post Vatican II wake and certain elements were not entirely lost, but muddled in ambiguous language.  So a quick translation produced a few 'inconsistancies' and of course it didn't take long for the heterodox eco-spiritual social justice crowd to lump in their 'inclusive' language and turn the Holy Sacrifice of the Mass into at times something resembling WWE Smackdown in Charismatic circles to Pee-Wee's Playhouse in other circles.  The Translation can be found here .  (The link is to the US Catholic Bishop's Conference and from there you can link other places,..) Three notable changes,.The Gloria, The Penitential Rite, and The Creed,..Will it be that drastic?  Of course not!  The texts though will be more Faithful to the Latin, which (,.put down your weed and listen up feminazis,..) always remained the official language of the Church!

So far the response has been mixed, my Pastor, a good and Holy priest has begun recatechizing the Parish and has said we should welcome the new Translation,..to that I say AMEN!  There are of course other priests, you know, the kind that don't wear their collars, tolerate everything except Catholicism, and who feel that this is a step backwards,..To them, I say we should smile, tell them God Bless, look deep into their eyes and tell them to 'get a freakin' life..' (uhhh,..with Charity of course ;))  May God Bless all my readers this Thanksgiving!