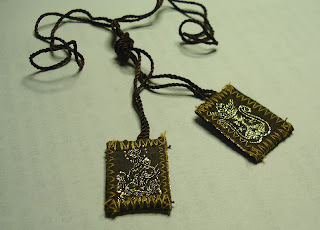 (The Scapular,...Catholic dogtags!)
These short little skits are intended to help stem the attack of the non-catholic, especially two that will appear often. Just like in life where our body demands a physical workout, we need to engage in a Spiritual workout. Mine includes Mass, the Rosary, Daily Office and Lectio Divina. Keep the Faith! Finally if don't know the answer to a particular objection, say so! There is no shame in saying that you need to look it up for yourself. It not only shows humility but also a chance to satisfy your own human reason.
St Thomas Aquinas,...................ora pro nobis.
Posted by Optimusmastro at 5:50 AM

I have never dialogued with a Muslim before, so I don't know much in that regard, though I have dialogued quite often with Evangelicals.

Are there any particular books you would recommend? Thanks.

For an evangelical, just use Church Father and Biblical origins,..so a book I would recommend is 'Evangelical is not Enough' by Thomas Howard. Mike, these people are incredibly well-meaning and sincere Christians who make us as Catholics look like cowards. They live out their Faith and wear or their sleeves! Even the most rapid Fundamentalist at least has the balls to stand up for Christ, especially on pro-life issues and traditional marriage!

For Islam,.I would recommend a book by Robert Spencer and Daniel Ali,.'Inside Islam, A Guide for Catholics.' Here a guy like me is in his comfort zone,.because we come at it from a philosophical/metaphysical perspective..God Bless!

Thanks for the recommendations!

Yes, I agree about evangelicals and fundamentalists. (I used to be a fundamentalist). I was thinking more along the lines of Islam (sorry for not clarifying better), which I see you have also given a recommendation for. Thanks!

For the Trinity thing, I always compare it to a family. Mother, Father and child together make one family. Separately they do not. In the same way, God is God in the three persons. Like you say, Father, (lover) Son (beloved) and the love between them (Spirit).