I've mentioned several times that since the 'decision' has been taken, way too many cool things have been happening, that I really just don't have time to blog or write about them all.  While this blog, is in many ways more theologically oriented, it doesn't mean that I don't have any other interests!  For those of you that have been following me, I have interests as you know, in MMA, Weight training and of course Transformers!  Although the Old Testament describes God, as a jealous God,..Our Lord has nothing to worry about as my interests only reflect diverse aspects of my personality.  In spiritual direction, I was told that Jesus will take all these qualities and mold them into a more Christianized version of their already existing attributes!  Picture it,..perhaps I will have a stole (God willing) with autobot logos on it, while having trained future priests and seminarians into little warriors to prepare for our battle or martyrdom!  (Please understand, that was a joke!)

Well,.aside from those interests, I have another one,..one that I've kept hidden,..so here goes!  My name is Marco and I love cooking!  A few days ago I watched the Superbowl with my friend Peter and his wife Luisa, and we decided to make a Spaghetti ala Carbonara!  He filmed some of it on youtube and well, (warning:  In one of the parts, Peter breaks a glass and swears audibly!)  let's just say that not a lot of people saw it but those that did sent emails asking me to put up some recipes!  Optimusmastro Carbonara Part 1 .  So waddaya think?  I've definetely got a few tricks up my sleeve especially with regards to cooking.  I will be putting up more videos in the future, especially a roast of beef, of porc, some more pasta dishes and of course Pate Chinois!  (To my American readership, you guys call it Shepherd's Pie!)  Note:  Although I'm a fitness trainer all dishes are high in calories, if I'm gonna cook then I'm gonna cook!

One thing throughout this discernement that I'm learning is that Jesus doesn't take away your sense of humour, or your quirks,..but He does purify them.  Remember that I'm still a man and thus need to emote at times especially with regard to long days filled with academics, prayer, jiu-jitsu and DA GYM!  If you guys want a recipe send me an email!  To the guy who asked me why I not audition for 'Hell's Kitchen' with Gordon Ramsey?,..Well, I have a teeny little bit of a temper,..and let's just say that that would be the episode where Fox Network garnered the biggest ratings!  The reason is simple.  I have a huge problem with anyone spitting out food especially when there are people who have nothing to eat!  My parents, and I credit them with this taught me to respect and remember those less fortunate, so ethically I'm completely against trivializing an entire meal because 'it isn't seasoned properly!!!' (his voice)  Secondly, anyone who knows me, knows that Ramsey's world would be flipped upside down after he yelled at me , not in a constructive manner but in his condescending manner,..A guillotine front face choke and he'd be sleeping nicely in under two mins,..

We all need hobbies, whether our vocation is to marriage or the consecrated life.  A healthy balance helps us with our own psychological well-being and enables to recharge for the battles that lay ahead.  Whether its the Gym (woohoo!) or video games, (nerd!) or even cooking, as long as it is something that can lead us into a better frame of mind.  Jesus used to retire to the desert,..sometimes those little pleasures can act as our own deserts!  By the way,..Epic Meal Time, those dudes out of Montreal basterdizing food,..1.  Yes, we all laugh, but too many people go to bed hungry,.something to think about,..and 2.   There is only ONE muscles glasses, and he's the dude typing this,..Challenge issued bro, anytime anywhere!  ;) 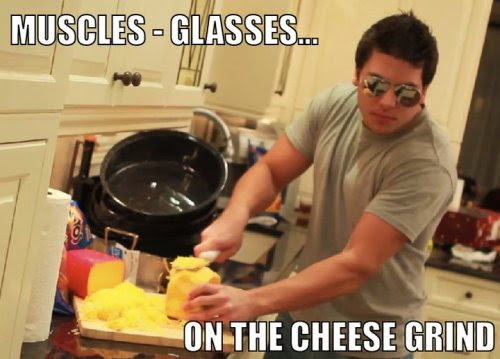 Posted by Optimusmastro at 6:28 AM